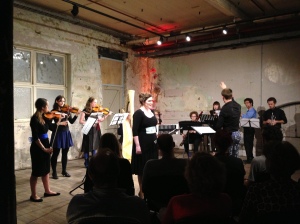 For their 2013 season the multi-arts Forest Collective bring chamber music, visual art, theatre and opera to the sprawling Abbotsford Convent. Opening the season is Shared Sounds, a juxtaposition of established and emerging British and Australian composers. Alongside this explicit rationale is the concert’s implicit exploration of the organic and the elemental.

Stephanie Osztreicher transformed the peeling walls of the convent’s Industrial School into a tulgey wood of ladders, music stands, paper flowers and projections as the evening’s autumn storm rolled overhead. Travelling to the concert, the rising smell of “petrichor” (meaning “dry earth,” a term coined by Australian scientists to describe the smell of rain after a dry spell) was an olfactory prelude to the rain-themed music of the Forest Collective’s ensemble in residence of the same name (Jess Fotinos, harp, Alexina Hawkins, viola, Rowan Hamwood, flute).

Fotinos and Daniel Todd (tenor) opened the concert with the spiritual transformations of St. Narcissus into tree, fish, girl and dancer in Britten’s Canticle No. 5 for tenor and harp. Britten’s evocative harp writing was juxtaposed with May Lyon’s own mercurial word painting in A Dream Within a Dream, based on a poem by Edgar Allen Poe.

A sequence of chamber works by Barry Conyngham, Conyngham’s teacher Toru Takemitsu, Mark-Anthony Turnage, Johanna Selleck and Evan Lawson highlighted the strength of the “collective” as an ensemble, corralled and conducted by Lawson. A highlight for me was Turnage’s Three Farewells for flute, clarinet, harp and string quartet. Lush harmonies and timbres filled the concrete chamber before clearing for a pointed and intimate encounter with Hawkins’ viola solo, with grumbling accompaniment from Ayrlie Lane’s cello.

While not quite the “interactive chamber music experience” promised by the season program, Shared Sounds plunges the audience into a rich atmosphere of water, wind and trees deserving of the collective’s name. The program also demonstrated a continuing interest among young composers in finding new effects and manners of working with text within an extended-tonal style.